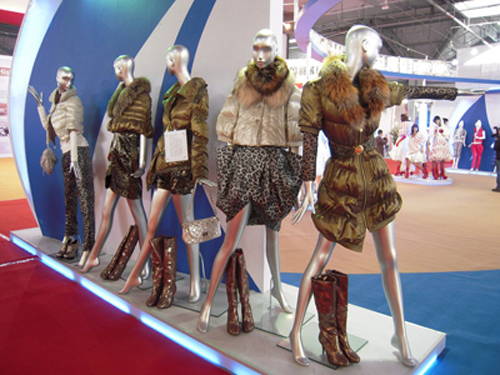 The latest products, the most fashionable designs and the most favorable prices are the ones that saw nearly one hundred well-known down apparel and products companies recently sponsored by the China Down Industry Association and the Peopleâ€™s Government of Xiaoshan District of Hangzhou City. After the appearance of the Down Fair and the 3rd Xiaoshan International Down Festival, the most intuitive experience was given.

After experiencing many problems in the domestic down market, such as fragmentation, lack of scale, and consumersâ€™ ignorance of down products, Chinese down companies began to choose to play steadily and grow green.

The show helped the down industry â€œIn this exhibition, Bosideng won nearly 400 square meters of booth space at a time, and launched two new concept fashion down jackets of â€œautumn downâ€ and â€œspinning memoryâ€, which became the protagonist of the audience and attracted numerous professional audiences and consumers. Go to negotiate and purchase.â€ A Bosideng staff member described the 17th China International Down and Feathers Expo and the 3rd Xiaoshan International Down Festival organized by the China Feather & Down Industry Association and the Xiaoshan District Peopleâ€™s Government in Hangzhou.

The "Feather Expo" has been held once every year since 1995 and is one of the largest exhibitions in the world's feather industry. The manufacturers and distributors of the Chinese and foreign feather industry strongly support and actively participate. The number of exhibitors has increased year by year, and the scale of exhibitions has gradually expanded. This has become an annual event for the international feather industry. In 2009, China Feather Industry Association and Xiaoshan District People's Government jointly organized the Feather Fair (cum-Xiaoshan Xiaoshan International Down Festival). It was a great success and is now the third.

In order to create more opportunities for exhibitors to negotiate with purchasers, the current feather expo has strengthened the organization of the purchase of down products buyers, providing more convenience for professional visitors. This year's â€œFeather Expoâ€ and the 3rd Xiaoshan International Down Festival exhibited an area of â€‹â€‹10,000 square meters, with more than 60 feather industry and well-known enterprises participating. As the largest down industry cluster area in the country, Xiaoshan has 28 exhibitors.

Yao Xiaoman, executive vice chairman and secretary general of the China Feather Industry Association, told reporters that China is the worldâ€™s largest producer, exporter and consumer of down products. The China Feather & Down Industry Association organises the International Down and Feather Expo to build a platform for domestic and foreign down products manufacturers, wholesalers and retailers to display corporate and product images, to create more corporate friends, discover business opportunities, seek cooperation and trade Opportunities for negotiations. "Feather Fair" has a large number of new products, new models launched in the past, and timely delivery of down-to-date information on down, down products and related industries to the market. It is a good time for industrial and commercial enterprises to negotiate trades and consumers to purchase new products.

Build green technology down jacket In this exhibition, Bosideng, Yalu, Ya Duck, North Swan, Salem and other well-known down apparel companies have shown their new products, including China's only first down jacket brand card Zhu Mi .

Li Guokun, chairman of the Hong Kong-owned company Fujian Kajumi Fashion Co., Ltd., said at the show that Kajumi down jacket stood out among many clothing brands and became the first and only down apparel brand to carry the Shenzhou spacecraft to the air. The purpose was not only to publicize. The Kajumi down jacket is equipped with â€œGod 8â€. With the help of space microgravity and high radiation environment, the manufacturing materials will be mutated. Kajumi will invite technical experts to analyze the mutated materials, and then produce a down jacket with more advanced technology. , Including the use of the latest scientific research to create advanced space down jackets. This will take an important step in the history of down apparel technology innovation, and is also consistent with the spirit of technological innovation that Kajumi consistently upholds.

All along, through continuous innovation, Kajumi Yurongrong strengthens its scientific research strength and enhances its core competitiveness and brand influence.

Li Guokun said: "Clothing is a work of art, so companies must be careful to make clothes. The pollution of clothing is even more serious than that of Sudan. Therefore, Chajumi will continue the production concept of "people-oriented" and develop a more environmentally friendly and healthy environment. Down jacket products to give back to society and consumers."

In this year's warm winter conditions, Bosideng was the first to introduce the "fall down" concept down jacket, the so-called "autumn down" is the use of ultra-thin fabric with fine tailoring, designed with a high down jacket down jacket, in both warmth At the same time, it also has a fashionable and flexible features.

The concept of "autumn down" has now been adopted by many companies. At the exhibition, the reporter interviewed some businesses about the effects of warm winter on production and sales, as well as coping strategies. They said that the warm winter will have some impact on sales. The task now is how to reduce the impact. The person in charge of Xiaoshan's local brand North Swan said that the conditions affecting sales in the warm winter are not as serious as imagined because the â€œautumn downâ€ will increase the fashion sense of down jackets. In this way, the production of fashionable, lightweight down jacket styles can stimulate the previous wearer. Down apparel consumers come to buy.

Unprecedented promotion of the brand to identify the market positioning At the exhibition, Liuqiao Group Co., Ltd. has a LCD TV on the wall of the exhibition booth, where it broadcasts advertisements for its leading product Diouda. A person in charge of the Diodar show told reporters that the Diouda brand adopted the TV shopping model and won a victory in the down jacket competition in 2011. Diouda originally advertised on a TV shopping channel in Zhejiang Province and adopted a new advertising model that directly distributed dividends with TV stations. After the product is sold on the channel, profits are divided between the television station and the company, but the company does not have to pay extra advertising costs. This new model is particularly suitable for companies in the brand promotion period. The person in charge said: â€œCompared to the use of high capital to invest in shopping malls, TV commercials are another kind of promotional model for small profits but quick sales. While gaining profits in TV shopping, the greater benefit our brand gets is through television free branding. Propaganda was carried out.â€ This free way to increase awareness has been effective so far, and now consumers in Zhejiang Province have greatly improved their awareness of Diouda.

â€œAt present, the down market for adult men's wear and women's wear in the domestic market is very saturated. There are big brands occupying major market shares. There are many SMEs competing to divide up the rest of the market. Therefore, Saiermei chose a differentiated competition model and set its sights on it. Professional Down Feather Children's Wear This unfinished 'virgin land' comes up. It turns out that Xermei is successful, Xalme is committed to the design and production of children's down jackets, and now has entered the ranks of leading domestic feather children's wear." Fei Tianwen, assistant to the President of Midea Clothing Co., Ltd., told reporters at the exhibition that in the next step, Purcell will develop elderly down garments, and specialize in designing according to the unique requirements of elderly people for down jackets. The trend of aging in China is becoming increasingly apparent. Down clothing will be a new economic growth point.

In addition to occupying the domestic blank market, Xalmei also increased its design strength to become its own brand and is committed to being a professional design service provider in China. Since the beginning of last year, Purcell has cooperated with some international professional down apparel players, such as Adidas and Nike. â€œAdidas has watched the manufacturing experience and stable quality of the children's wear in the United States for many years. This year, 300,000 orders will be placed.â€ Fei Tianwen said that currently the company has some problems in the adjustment of production capacity, so it is necessary to improve the production model. In order to do a good job, we must improve the production model, and we must really make big and down children's clothing bigger and stronger.

Feather Dummies Promotion Heavy Duty Down Feathers are still the focus of this feather Expo exhibition, domestic manufacturers with strong down feathers have brought the most fashionable new products, made special booths at Feather Expo to strengthen the down comforter Promotion effect.

Chen Zhaoxian, president of the Zhejiang Down Feather Industry Association and president of Zhejiang Tianxiang Group Co., Ltd., told reporters in an interview that as people's living standards improved, people's awareness of down comforters gradually increased. In foreign countries, Japan has the highest penetration rate of duvets and duvets on average. Everyone has a duvet set; the penetration rate in the United States has exceeded 50%; the European penetration rate has exceeded 85%, and China's current penetration rate of down bedding is barely 1%. . Judging from the low penetration rate, there is great room for future development of Chinese down bedding. â€œNow the domestic market for down comforters is like the down apparel market in the 1980s. There will be 20 to 30 years of development space for duvets.â€

Chen Zhaoxian also stated that all levels of government have always attached great importance to the development of the down industry and strongly supported it. It is with the strong support of the government that Xiaoshan has gradually owned a number of domestic and overseas famous down companies, and is committed to brand building. A group of competitive enterprises such as North Swan and Liuqiao will stand out. â€œChina Feather Industry Association has also played a positive role in promoting the development of the industry, such as the Feather Fair organized by the Association. Through the exhibition, the down industry can be more cohesive, and at the same time, there is more contact and cooperation between enterprises. â€

Down jackets are not worn all year round, but the duvets are universal for all seasons. Although, at present, the awareness and attention of the market in the South have begun to increase, but China's feather and bedding industry still belongs to the newly emerging industry. It is a long way to go for down comforters. With the help of the â€œFeather Fairâ€ platform, more down brands will spread in the future, and the domestic down industry is expected to continue to grow.